Now that I’m back and getting a little bored, thinking “What Next”, it’s probably a good time to look back at the wonderful half-year I’ve had.

My life of leisure started much before the blog, and I suddenly feel compelled to write about a fantastic trip that we had to Angkor Wat in Cambodia.

In Feb 2009, I had not even heard of Angkor Wat. Around the time when Souvik started thinking about the Vietnam job (in June/July 09), there was an article in Nat Geo Traveller on the temples of Angkor, and that’s when I started getting excited. By January this year, we had to think about what to do during the week-long Vietnamese New Year (Tet), and narrowed down on Angkor. Suman decided to join us on this holiday, to double the fun. A little research in the Lonely Planet, and some on the net, and off we were!

Cambodian visa was a cakewalk – 2 hours online turnaround! We decided to shun the typical big hotels, and picked a boutique hotel instead – Villa Siem Reap. No planning beforehand about schedules, etc; we decided to go with the flow. Control freak that I am, I still looked up a couple of blogs for some great tips on what to do, etc.

For a holiday getaway, we couldn’t have picked better than the Villa. It had such a great ambience – all done up in Cambodian furnishings and beautiful colours. We got in at night – they sent a tuktuk to the airport to pick us up, and planned for a guided tour of Angkor Wat and Angkor Thom for the next morning.

We set out at 8.30 on the first day, and explored the beautiful temples of Angkor with a well-informed English-speaking guide. It was quite hot, however, and within a couple of hours, our spirits started to flag. The Villa had packed us a light lunch and plenty of water, and we supplemented that with tender coconut water and beer. So much to see, admire, and photograph: 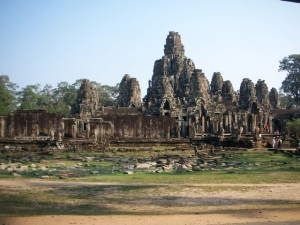 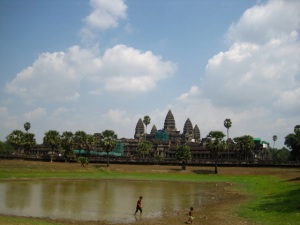 By afternoon we’d had enough of temple hopping. Decided to call it a day, and retreat to the cool comfort of our hotel. In the evening we set out to explore the Pub Street in Siem Ream – recommended by all as the #1 place for hanging out. A short walk from the Villa, we came upon this street that looked like another planet from where we’d been in the morning. All the tourists to Angkor to be found in Pub Street, swigging away draught beer @ 50 cents (USD) a glass, and cuisine ranging from traditional Cambodian to Mexican, Italian, Indian and American. HEAVEN! Cambodian cuisine was a revelation – Amok curry, red curry, mmmmmm; I shopped for some Cambodian spices to add to my kitchen.

We changed our tactics for the rest of our holiday. To beat the heat, we would set out at 5.30 am, explore till around 11 am, then head back for shower and siesta. Spend the rest of the day on the cushions at the Villa, and hang out at Pub Street in the evening. For breakfast we would pack some cans of cold coffee (available in supermarkets) and cookies. I had also carried savoury ‘mathris’ which provided many moments of delight!

On the next morning we went to Ta Prohm before dawn, and it was one of the eeriest experiences of my life! The trees have taken over the temple there, and look ready to gobble you up with no warning! 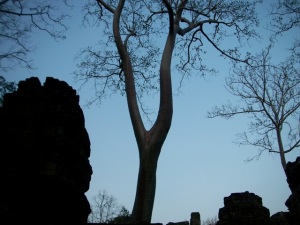 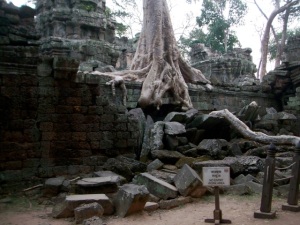 On the way back, we were tempted to climb at Ta Keo, without realizing the difficulty of the task. I’m short, not a climber, and very prone to falling/slipping/tripping. The steps of all temples at Angkor are high and narrow. After a lot of sweating and encouraging words from Souvik, I made it to the top. Getting down was scarier, made worse by watching the locals skip down with both arms loaded with wares to sell! 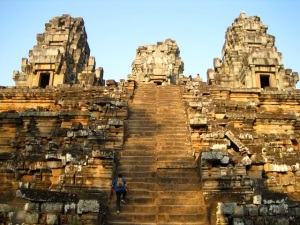 We paid a visit to the museum that afternoon – very well-presented artefacts from the past millenium!

Day 3 was a day of trekking up to Kbal Spean – a pleasant trek with plenty of pit stops, ending at the riverbed of a thousand lingas. Beautiful stone carvings in the riverbed. By virtue of being the first people of the day there, we had the place to ourselves for a while. Stopped at Banteay Srei on the way back – this temple has the most intricate carvings, and the stone is different. It was late morning, and the heat and crowds curtailed our appreciation of the temple to a large extent. 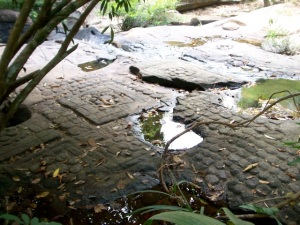 Suman left that night, and Souvik & I had another day to spend there. We decided to hire bicycles and watch the sunrise at Angkor Wat. I’m used to cycling, but Souvik isn’t, and it took him a while to get a hang of the gears. Cycling was pleasant in the mornings, except that there were hordes heading to the temples to catch the sunrise. We got in from the eastern gate, had our breakfast, and waited for the sun. While I indulged in some photography & sketching, Souvik cycled around and discovered the best viewing spot on the western side! I rushed there a little too late, but managed a beautiful shot: