The Beauty of Dieng

There are some places whose names stick in your brain and don’t budge until you’ve tackled them head on. Dieng plateau has been one of them. While I’ve been to Jogja and visited most of the temples around there, Dieng has stayed on my list of must-visit since almost a year.

Not so much for the temple ruins, but for the sunrise, Sara and I took the long way out to Dieng: by train from Jakarta to Yogyakarta, then by road onwards to Dieng in the middle of the night. I’m loving these long train journeys across Java, where you just have to get to the train station in the nick of time, and then sit back and relax for the next 7-8 hours. There’s a bit of thrill in packing a nice breakfast and lunch for yourself, and a few sinful treats, like Sara’s mint-chocolate brownie muffins. Trains leave from Stasiun Gambir, but none of the local trains halt here, so you must have a taxi to drop you off, especially if you are lugging multiple bags. It would’ve been brilliant to hop on to the local train to Tanah Abang, then change trains to stop at Gambir, but I don’t suppose the town planners had commuter convenience on top of their minds while designing the local transport systems.

We were destined to do this trip at an easy pace, with our Jogja driver not willing to go even a little faster than 40 kmph on the highway. The journey of about a 130 km took almost 5 hours (route). We stopped at the Dieng village to pick up a guide. Sunrise tours are popular here, it was no hardship to find a guide at 4 am!

We got to Gunung Sikunir, and headed off to the top of the hill. Sara was smart enough to have packed a head-lamp, which she planted on mine, coz I insisted on tripping over all the big stones. Hiker I am not, and we needed a number of breathing breaks on our way up. We did make it in time before the sun came out! 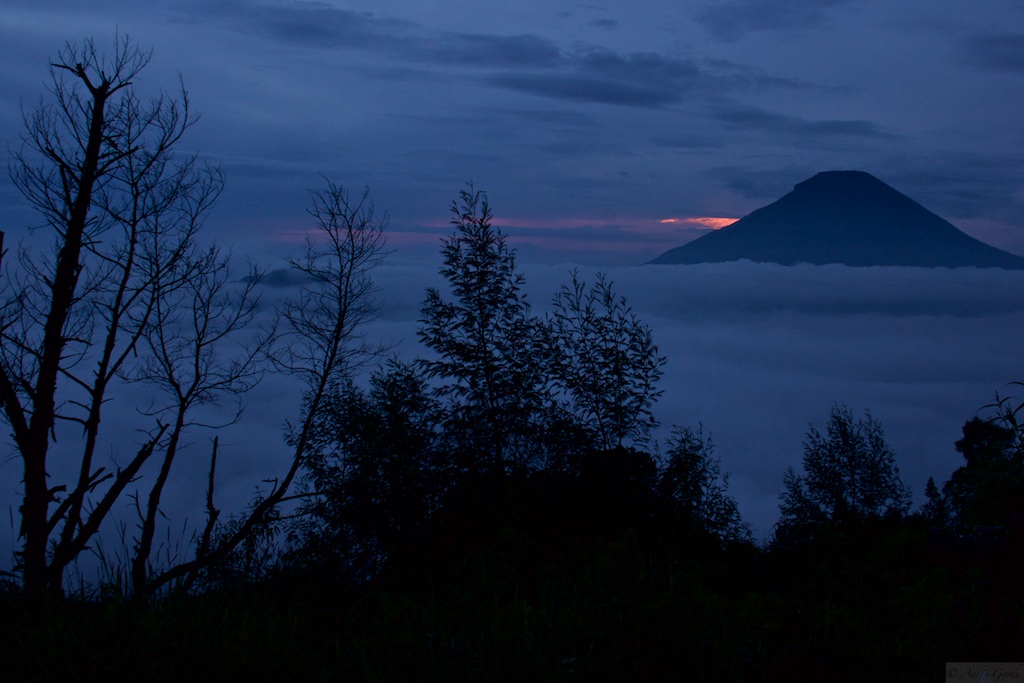 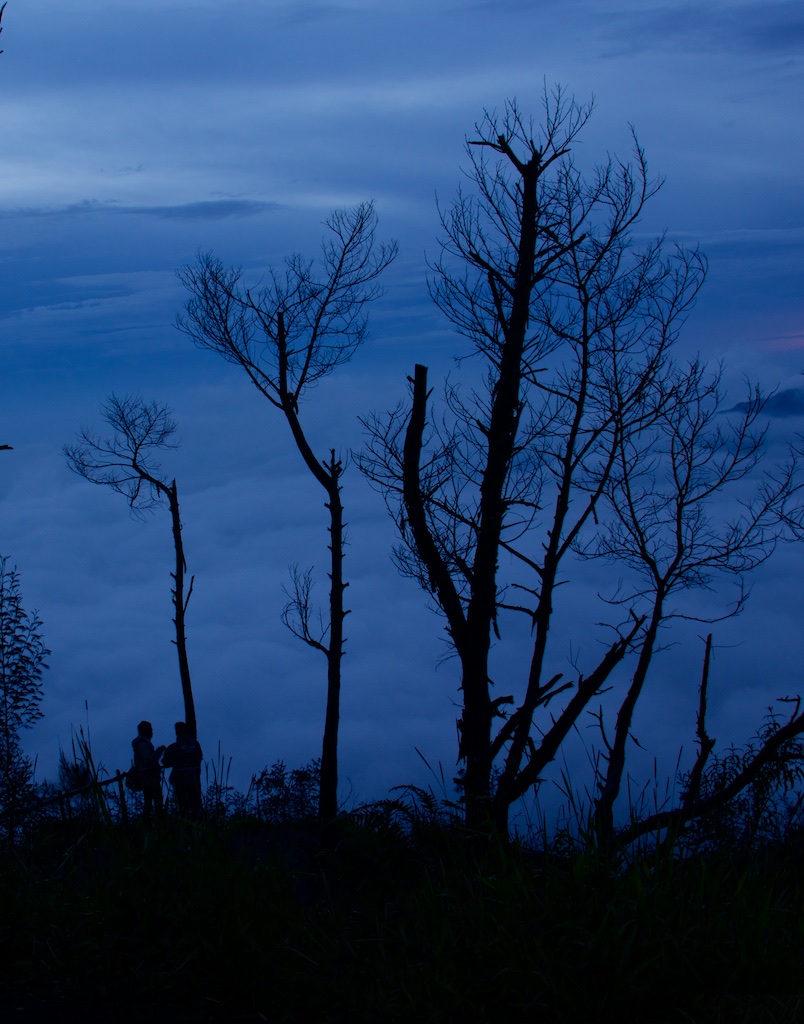 Though the sun sent out a ray from behind the mountain, it chose to stay out of sight, denying us a glamorous sunrise shot! The clouds and the mist swirling around the hills was a beautiful sight, and we had to get creative for our photos.

Whatever forest might have existed in this region before has now been cleared for plantation, potatoes mainly, and some other vegetables too. We drove around a little to catch some of the other sights. 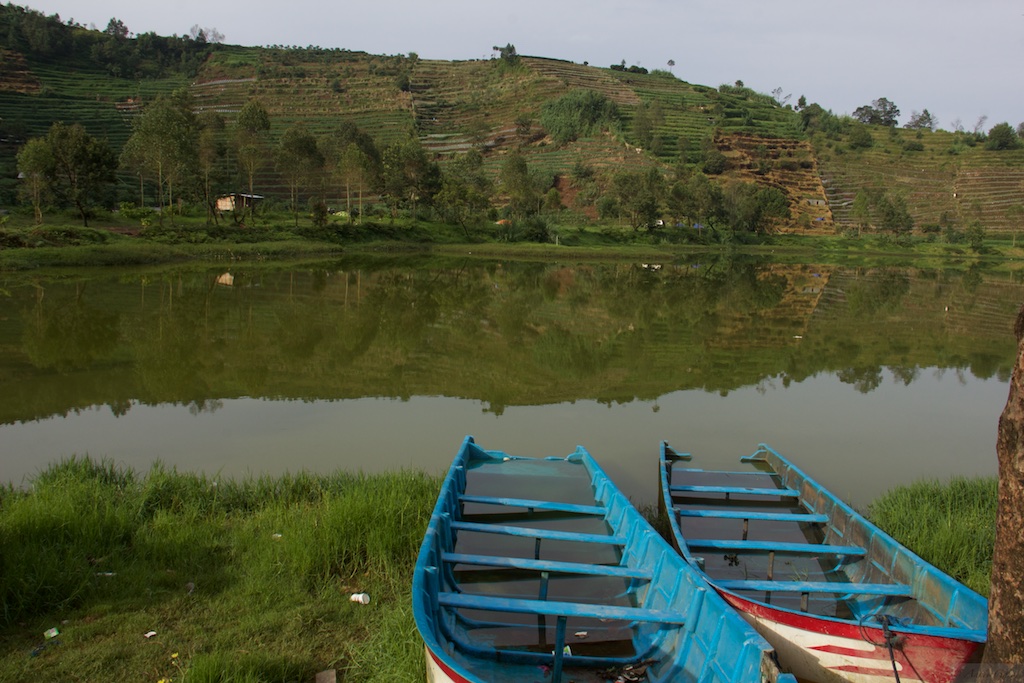 There was another short walk up to spot the Telaga Warna (changing colors lake). Thanks to the absence of the sun, we could see just the one color.

There was a perfect spot from which to admire this landscape:

As for the temples? Almost as an after-thought, we stopped over to see the ruins. There are only a couple of them left standing. What is most striking about these temples is their location, surrounded by the hills, enveloped in the mist. The ‘touristification’ of the site evokes mixed feelings in me. It’s nice to have access to facilities, but the aura is lost. 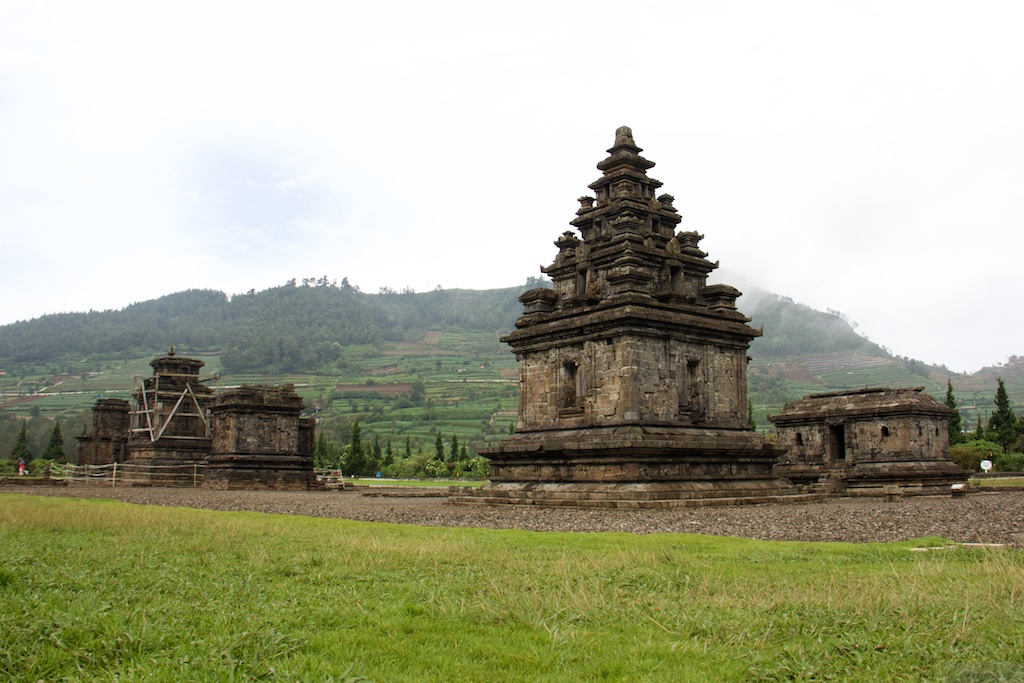