That trip… Quatrième Jour: on Foot

We spent a rather warm evening in Eguisheim, and were taking it easy in the morning on day four. The plan for this day was to give the bikes and our ‘seats’ a little rest. After a typical French breakfast, we cycled to the neighbouring town of Colmar, parked our bikes near the town centre and set off on foot to enjoy the touristy sights.

Colmar is by far the biggest town we’ve encountered on our tour of Alsace. It was reminiscent of Florence, Italy, with the big cathedral and the sidewalk restaurants and hundreds of map-toting tourists, though on a much different scale.

It seemed to be little school kids’ day out, with many groups milling about the town centre and in museums, drawing, or having a lesson. Colmar’s most famous son is Frédéric Bartholdi (take a moment to guess what’s his claim to fame). Turns out, our last few holidays have had a little connection to each other. In Chianti, Italy, we heard of the explorer Verrazzano, who was supposedly one of the first Europeans to cross into New York Harbour, and has a bridge named after him. Last year we spent a part of our holiday in New York (hence the connection), and of course, admired the Statue of Liberty, which was gifted to USA by France, and sculpted by…Frédéric Bartholdi! Sadly, the Bartholdi museum in Colmar is closed on Tuesdays, and so we haven’t been educated about his other works.

After a just about average lunch of more Flammekueche (smaller the city better the food, and vice versa; Ribeauville beat Colmar hands down), we strolled over to the area of ‘little Venice’ and the covered market.

It’s a shock for us to see how much the sun and heat are affecting our holiday. As the local grapes ripen in the sun, we wilt, and by 3 pm everyday, there’s nothing I like better than the shade of a big tree. We were lucky to find that in Colmar.

And there was a well spent half hour!

Back into Eguisheim, we were quickly out exploring our own village which holds the distinction of being THE prettiest village. Our window looked out to the grand fountain, and there was not one, but two stork nests in the buildings next door. Eguisheim is another fortified town with very picturesque walks on the Rue de remparts. 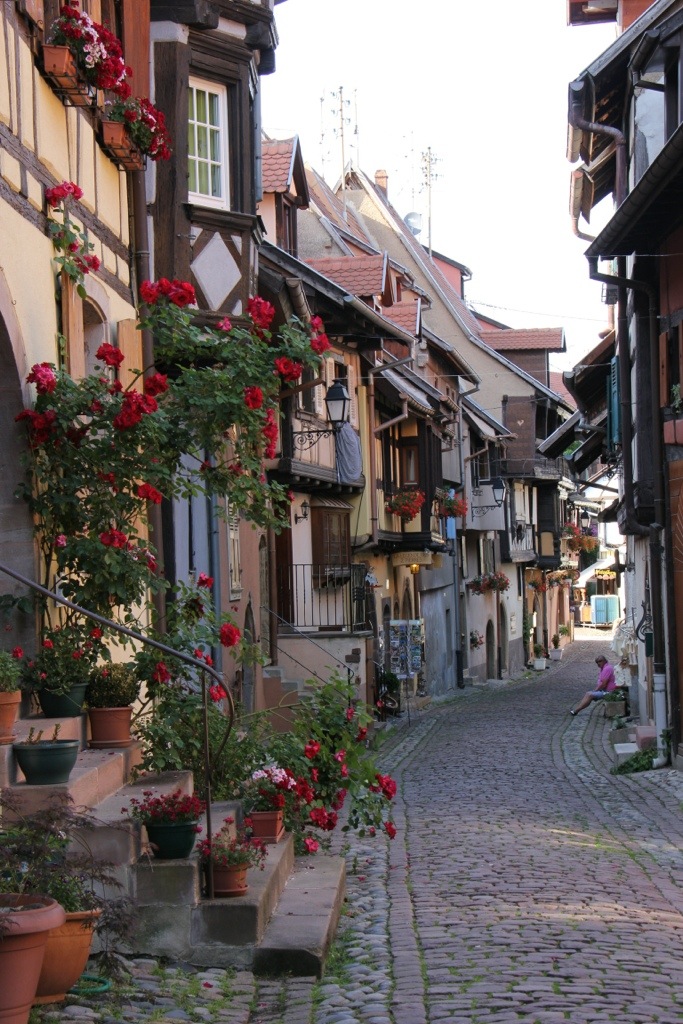 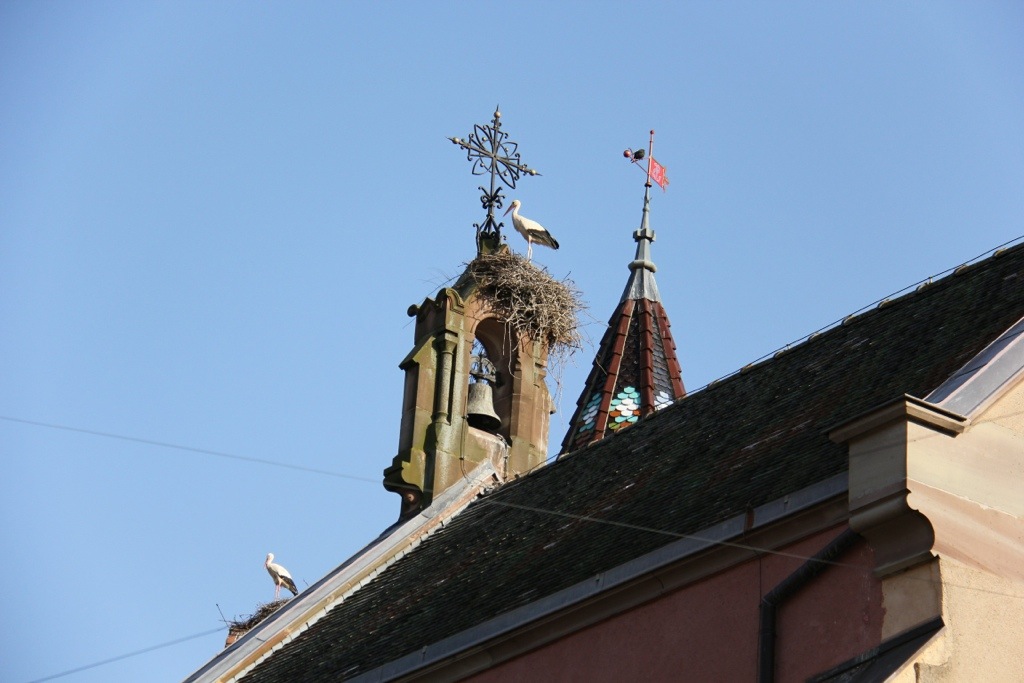 We wandered around until dinner time, then bravely entered the restaurant to face our ‘ordeal’. Luckily (!) they had no vegetarian food, so I simply munched down the salad (Souvik had the mandatory foie gras), but Souvik loved his first course of flaky pastry filled with fish and egg swimming in a cheese sauce. So much that he offered to finish mine, after I was done eating the sauce with bread. Naturally we were full after this, and all ready to refuse dessert until we were presented with this:

I call it the chicken begging mercy, after being stuffed with pork. I was allowed to place mine aside, and eat the legumes below. Souvik needed his bed! But shamelessly agreed to eat his crème brûlée, as I downed some coffee. BURPPP!

All said and done, the highlight of the day has been the shop signs! Very artistic, many of them done by Hansi, a talented caricaturist from Colmar. See for yourself some of the coolest ones: