Jack & Jill went up the hill…

Souvik and I are recovering from a weekend of contrasts. We took advantage of the long weekend to trek up Gunung Bromo. This was technically our second trip, but if you consider the fact that the first time round we were looking at the wrong mountain, then this one was the eye opener.

I joined Souvik in Surabaya on Friday, and we drove straight off past Probolinggo to Sukapura, and checked into Java Banana. We needed lunch, but the restaurant at the hotel was not really keen to cater to guests, so we had to make do with some roadside mie goreng and set off towards Bromo right away. I knew all along it would be a killer trudge, and had been trying to ‘condition’ myself on the treadmill, but 3 km ALL uphill was way too much for my gasping self. All the wheezing genes of my forefathers made an appearance (or was it just my own unfitness?), and I stopped every 100 odd steps to catch my breath. To make it worse, Souvik looked like he was strolling in the park, and even lugged my camera bag most of the way. Not to mention all those ‘helpful’ fellows on motorbikes who offered to transport me to the destination. But I was determined to do it myself, and huffed and puffed my way to Cemoro Lawang, where we had our first sighting of the ‘lunaresque’ landscape of Gunung Bromo and its companions. Finally it seemed worthwhile to pull out that camera!

I was bent upon trudging through the ‘Sea of Sand’, so fortified by energy bars and armed with face masks, we started downhill toward the caldera. Downhill was no cakewalk we found out soon enough – the 30-40 degree slope took every ounce of effort to keep my balance and not go tumbling down that hill.

The Bromo caldera is not your regular pretty landscape. It’s all shades of grey and brown, a direct contrast to the hills and fields you pass on your way there. Walking through the sea of sand or volcanic ash, you start to realize that there’s a different beauty in this rugged scene. From the dust kicked up by vehicles and footsteps, to the play of light that adds another dimension, the view is simply breathtaking (and not just from the effort of walking!). 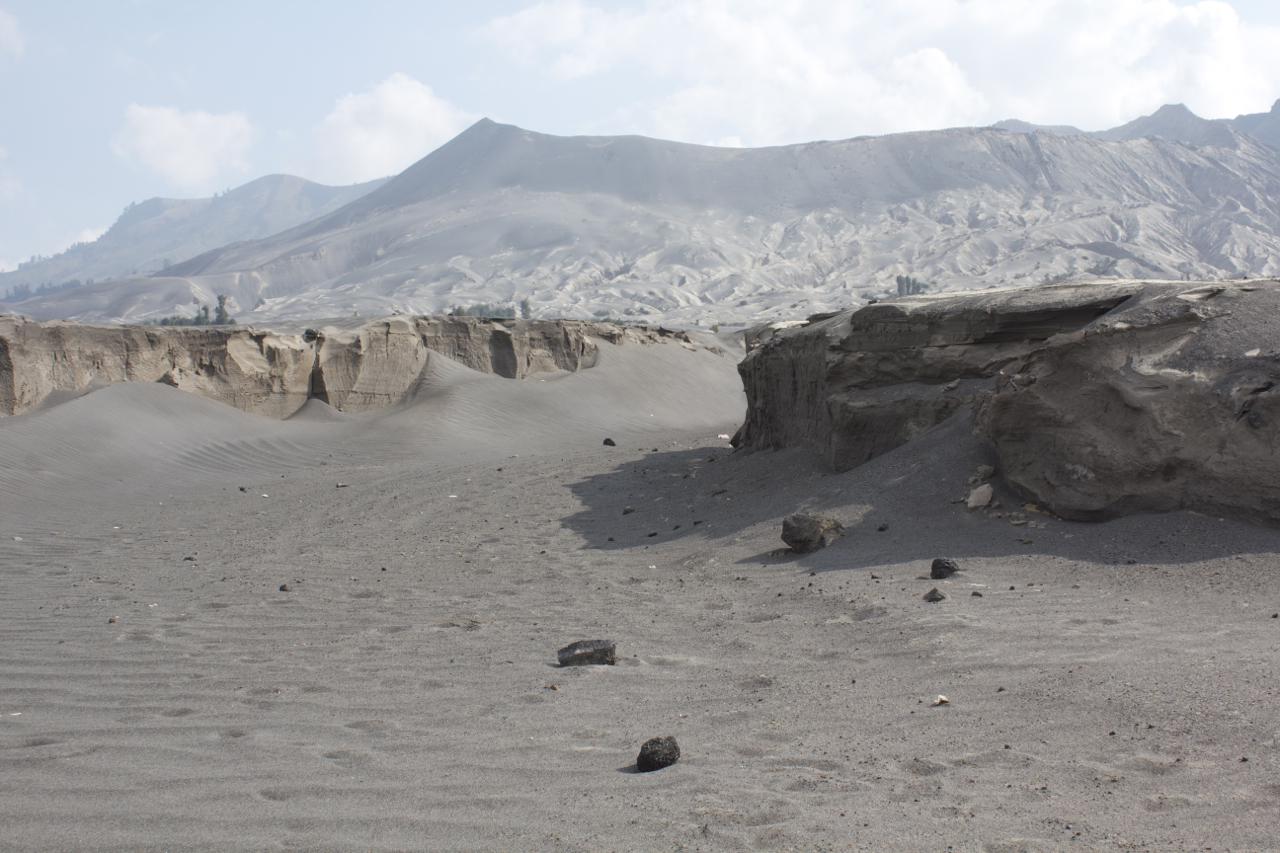 At the foothill of the mountain, another surprise awaits you. Horses, with offers to rest your tired feet and ride part of the way up to the Bromo crater. I resisted that offer for the longest time, but finally caved in because it was getting late and we did want to get up there and back before it got dark. The adventures on the horse is another story; I’m just thankful both me and the horse got up there without incident, while Souvik walked. The last mile was 200 steps, all covered in ash. So you have to hold on to the cement railing for dear life and haul yourself up. I set the record for the slowest ascent; luckily most people were heading down, so I didn’t hold up anyone else. 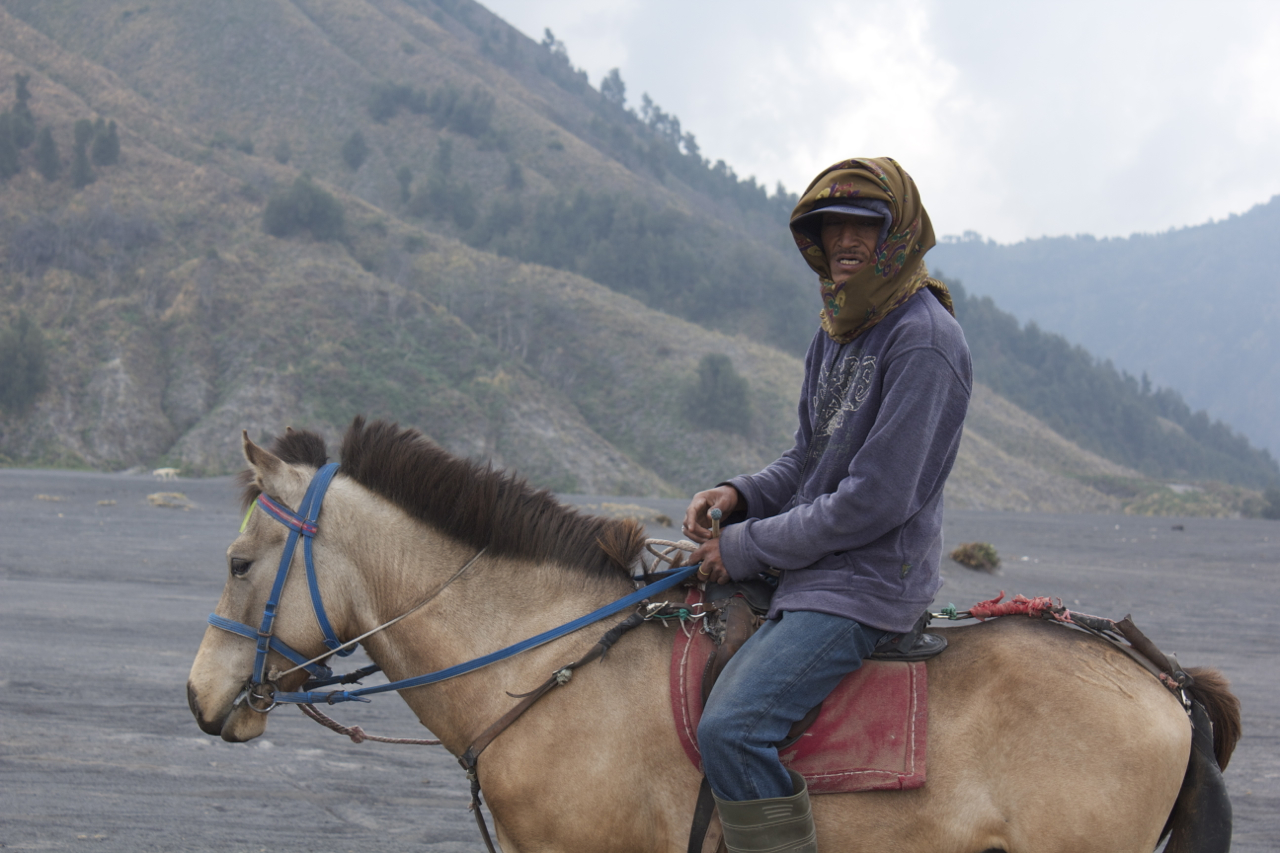 Once there, we were naturally agape at the activity bubbling in the dark and deep crater, letting out clouds of sulphur. The might of midget Bromo was obvious! (Hint: it’s not the perfectly formed conical mountain in the picture, it’s the squat one, with its head blown off, and occasional puffs of sulphur coming out of its big mouth.)

The way down was much much easier, but we decided to ride back on motorbike across the caldera – another hair-raising adventure. Back at Cemoro Lawang, we found some more mie goreng, and missed admiring the sunset behind Bromo. The break gave us impetus to walk back – how tiring can a downhill walk be? Energy in, caution out, no referring maps, and we lost our way twice. The first one was serendipitous – just  a parallel, shorter route with an intense gradient, like walking in 10-inch heels. The second mistake was foolish, and we ended up triple seat on a motorbike because the thought of backtracking 100m uphill would’ve been the last straw. Finally made it back to hot showers and cozy bed – I’ve never been so pleased to see hotel lights before!